Translation and the Afterlife of Words: A few thoughts on Ruden's new translation of the Confessions 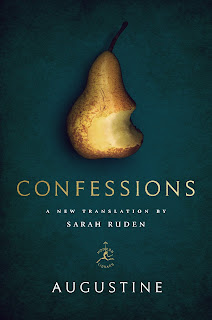 Translations are a bit like music: you attach yourself to what you encountered in your youth. You reify what emerged when you were coming of age. You canonize what formed you.

So if you first encountered Proust through battered paperback versions of Scott Moncrieff, you'll be disposed to resist Lydia Davis' masterful new translations. "Accuracy" hardly matters: for you, Proust just speaks Scott Moncrieff.  A different translation sounds like someone else's voice. These commitments and loyalties are not necessarily rational; they're more like an existential allegiance--even a kind of friendship.

So, too, with translations of Augustine's Confessions.  For some generations, it was Pine-Coffin. Others were passionately committed to Frank Sheed's rendition.  For me, it was and always has been Chadwick's translation for Oxford University Press--which is why, as you might expect, I found Boulding's translation a tad overwrought, like she was trying too hard.

No surprise, then, that I greeted the arrival of Sarah Ruden's new translation with skepticism.  And within the first page--in the first line!--my skepticism was confirmed and I recoiled in my Chadwick allegiance.  The occasion was her decision to translate dominus as "Master" rather than "Lord."  So the cherished opening line of the Confessions greeted me as: "You are mighty, Master, and to be praised with a powerful voice" (Ruden). Contrast this with Chadwick's opener: "You are are great, Lord, and highly to be praised."

I quite literally closed up the Ruden translation in a kind of literary disgust.

Imagine my sense of chastisement, then, when no less than Peter Brown--the unsurpassed biographer of Augustine--praised Ruden's translation. Even worse, Brown particularly lauded Ruden's decision to render dominus as "Master."  Here's Brown making the point:

The measure of the success of Ruden’s translation is that she has managed to give as rich and as diverse a profile to the God on the far side as she does to the irrepressible and magnetically articulate Latin author who cries across the abyss to Him. Most translations of the Confessions fail to do this. We are usually left with the feeling that one character in the story has not fully come alive. We meet an ever-so-human Augustine, with whom it is easy to identify even when we most deplore him. But we meet him perched in front of an immense Baroque canvas called “God”—suitably grand, of course, suitably florid, but flat as the wall.

How does Ruden remedy this lack of life in God? She takes God in hand. She renames Him. He is not a “Lord.” That is too grand a word. Its sharpness has been blunted by pious usage. Augustine’s God was a dominus—a master. And a Roman dominus was a master of slaves. Unlike “Lord,” the Latin word dominus implied, in Augustine’s time, no distant majesty, muffled in fur and velvet. It conjured up life in the raw—life lived face to face in a Roman household, lived to the sound of the crack of the whip and punctuated by bursts of rage.


He continues: "To make God more of a person, by making Him a master, does not, at first sight, make Him very nice. But at least it frees Him up. It also brings Augustine to life."

When someone like Peter Brown is making this point, you step back from your allegiances and start to question yourself.

But having done that, I'm digging in and sticking with my Chadwick, and disagreeing with Brown (and Ruden).  It comes down to the life of words and who "owns" Augustine.

First, the life of words: Every translation is an adventure in sailing from one language to another, and often from one time to another. (I have some of my own experience with such mis/adventures.)  And words in either language are not static: they have a life of their own. Indeed, they have an ongoing life that survives their speakers and authors such that words come to us encrusted with all kind of barnacles and freeriding associations by the time they disembark on the shore of our imagination.  This is certainly true of the three words at stake here: dominus, Lord, and Master.

Brown thinks "Lord" carries a whiff of medieval feudalism and prefers "Master" because it reflects the antique world of Augustine's use.  But this is to evaluate a translation of the Confessions as a classicist, and to imagine that readers of Augustine are coming to it as classicists.  For those who encounter the Confessions as a devotional classic--which is still the vast majority of its readers, I expect--their interest and investment is not merely historical or antiquarian.  More to the point, I doubt many of them appreciate the late-ancient connotations of dominus, nor do they think of feudal fiefdoms when they hear the word "Lord."

Conversely, to praise the rendition "Master" for its classical accuracy and literary verve seems to quite willfully ignore all the connotations that have attached themselves to the word "Master." Indeed, perhaps I found it particularly jarring and offensive to read that opening line of Ruden's translation because I had just finished Colson Whitehead's disturbing but essential novel, The Underground Railroad, which paints a world full of "Masters" that were one more reason to believe God couldn't possibly exist.

This brings me to my second point. In some ways, this is a question of who "owns" Augustine--not in the sense of who can claim him, or invoke him, and claim to speak for him.  I mean something different: which afterlife of words is most germane to the project that Augustine himself is engaged in?  Which history of connotation overlaps with Augustine's endeavor?

When we consider these questions, I think "Lord" is the right choice precisely because of the afterlife of this word in Christian piety.  When the vast majority of Christians hear or say the word "Lord," they are not academic historians for whom medieval feudal orders are rumbling around in their heads.  They are people who are part of a larger people that has been praying to a Father for millenia.  "Lord," for them, is not "grand;" it is familiar.

Indeed, this is what's so surprising about Ruden's decision in that opening line. By rendering it "You are mighty, Master, and to be praised with a powerful voice," she virtually cuts off the echo of allusion to Psalm 47:2 that Chawick recognizes. Ruden's rendition is a decision that hides this as the language of prayer--which is surely an odd thing to do for a work that is, in its entirety, framed as a prayer. The language of Chadwick (and others), invoking "Lord," pays homage to language prayed for centuries before him and, more importantly, prayed for centuries after him.  It is a translation decision that recognizes the ongoing effect of the King James Bible in transforming the connotation of "Lord" for English-speakers ever since (a reality that is still true even in our so-called "secular" age).  And its find its home among readers who are co-pilgrims with Augustine, who approach their dominus as co-heirs with the Son.
James K.A. Smith at 2:47 PM
Share
‹
›
Home
View web version