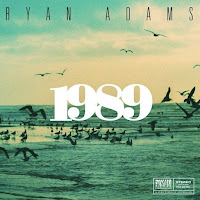 Taylor Swift's 1989 is often the soundtrack for my morning run. Its pop energy is just what my middle-aged body needs to keep pace. And "Shake It Off" queues up just as I'm starting to flag and I'm energized to shake off the doldrums, and all the haters.

This morning I bumped Ryan Adams' cover of 1989 into the run rotation.  It was a revelation.

First lesson: his is not a soundtrack for vigorous exercise. More like the score for a dark, lonely Friday night corkscrewing yourself into a bottle of bourbon.

But the second lesson is more important: Adams' version taught me something about worship.

When you listen to Adams' cover of Swift's album, you finally realize how incredibly sad it is--that buried down beneath the perky melodies and auto-tuned precision of a pristine sound is a lyrical world of heartbreak, disappointment, and despair.

Not until you hear Adams' mournful rendition, in the gravelly timbre of his voice, does the truth of 1989 disclose itself.  It's like, up to now, the melodic tenor and sonic grammar of Tswift's album was lying about what it said. The sound isn't true. There is a kind of disclosure and revelation and truth that is viscerally carried in the sonic environment of the album, and it took the heartbroken musical genius of Ryan Adams to unveil this--to point out the cognitive (and pre-cognitive!) dissonance at work in Taylor Swift's original.  Adams' cover tells the truth about the music, and thus tells the truth about a sad, broken world by redeploying Swift's lyrical honesty in a sonic environment that fits.

(Jeremy Begbie could explain this much better than I ever could, but I can't imagine convincing him to listen to either version of 1989!)

What does this have to do with worship?  We live, you might say, in a major chord culture.  We live in a society that wants even its heartbreaking lyrics delivered in pop medleys that keep us upbeat, tunes we can dance to. We live for the "hook," that turn that makes it all OK, that lets us shake it off and distract ourselves to death.  And this cultural penchant for a certain sonic grammar seeps into the church and the church's worship, so that we want songs and hymns and spiritual songs that do the same.  But as a result we often create a (pre)cognitive dissonance between the Bible's honesty, carried in our hymns and psalms, and our pop retunings.  Or we embed them in a sonic liturgical environment that endeavors to be, above all, "upbeat" and positive--a weekly pick-up encouraging you to just "shake it off."

But then a Ryan Adams comes along and takes you back to lament, and reminds you of all the minor chord moments of the biblical narrative, and invites you into a sonic environment that actually tells the truth about the broken world you live in, and that your neighbors live in, and that refugees from Syria live in.  Worship should be a proclamation that tells the truth, not just lyrically, but sonically.  And that means music that resonates with broken hearts.  Even though the Gospel exhorts us to "lift up our hearts," sometimes that only happens because God in Christ comes down to meet us in our brokenheartedness.  That will sometimes happen in song.
James K.A. Smith at 11:46 AM
Share
‹
›
Home
View web version